“Lenin is said to have declared that the best way to destroy the Capitalist System was to debauch the currency. . . . Lenin was certainly right. There is no subtler, no surer means of overturning the existing basis of society. . . .The process engages all the hidden forces of economic law on the side of destruction, and does it in a manner which not one man in a million is able to diagnose.” — John Maynard Keynes
Posted by Dr. Antony P. Mueller at 18:20 Nenhum comentário: Links to this post

Castro’s Demise Won’t Erase Troubled U.S. Legacy: Enrique Krauze
Latin America’s romantic attachment to the idea of revolution began in Cuba and achieved its greatest strength there. And it may well come to an end there..
Uruguayan intellectual, Jose Enrique Rodo, wrote an essay called “Ariel” (with its metaphors inspired by Shakespeare’s play “The Tempest”) in which he formulated the opposition between the Anglo-Saxon world and Latin America as a conflict of civilizations. The U.S. was “Caliban” (barbarous, greedy, materialist), unsuccessfully intent on dominating Latin America, which was depicted as “Ariel” (civilized, spiritual and inherently superior.)  ...
Mais
Posted by Dr. Antony P. Mueller at 15:12 Nenhum comentário: Links to this post

"In a world of unexpected change the maintenance of wealth is always problematical; and in the long run it may be said to be impossible."
Ludwig Lachmann
Posted by Dr. Antony P. Mueller at 12:40 Nenhum comentário: Links to this post

The excellent PBS/BBC documentary WWII Behind Closed Doors explains how Stalin, having actively contributed to the outbreak of the war, also got the biggest prize at the end of it by the ruthless and immoral manipulation of all parts involved (on the right, Stalin as TIME's "Man of the Year" in 1942). The documentary also depicts a somewhat dictatorial, sometimes unethical FDR, in contrast with a more virtuous and human Churchill.
Veja aqui o trailer do documentário do BBC
Posted by Dr. Antony P. Mueller at 11:18 Nenhum comentário: Links to this post

Posted by Dr. Antony P. Mueller at 11:09 Nenhum comentário: Links to this post

O que significa ser um libertário? O professor Jeffery Miron da Harvard University oferece uma resposta. De acordo com Miron, libertários tem um respeito enorme pelas decisões individuais. Enquanto outras ideologias tentam utilizar a força governamental para aplicar suas ideias de como as pessoas devem agir ou se comportar, libertários pensam que indivíduos devem ter ser deixados em paz para viver suas próprias vidas como eles acharem melhor.
Veja a curta palestra aqui
"The only freedom which deserves the name is that of pursuing our own good in our own way, so long as we do not attempt to deprive others of theirs, or impede their efforts to obtain it. Each is the proper guardian of his own health, whether bodily, or mental or spiritual. Mankind are greater gainers by suffering each other to live as seems good to themselves, than by compelling each to live as seems good to the rest."
John Stuart Mill
Posted by Dr. Antony P. Mueller at 11:02 Nenhum comentário: Links to this post

How Khan Academy Is Changing the Rules of Education

Posted by Dr. Antony P. Mueller at 05:05 Nenhum comentário: Links to this post 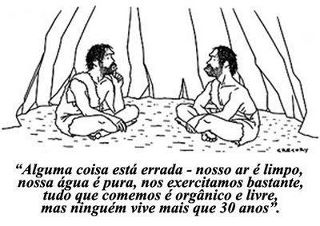 Posted by Dr. Antony P. Mueller at 06:55 Nenhum comentário: Links to this post

Luis von Ahn, the man who brought the world CAPTCHA and reCAPTCHA unveiled his newest and most innovative project to date: Duolingo. How can you translate the entire internet and do it for free? Duolingo will be a revolutionary product in which millions of internet users from around the world will work together to translate the internet and learn a new language at the same time. All for free.

Luis von Ahn is the A. Nico Habermann Professor of Computer Science at Carnegie Mellon University. He builds systems that combine humans and computers to solve large-scale problems that neither can solve alone.

About TEDx, x = independently organized event
In the spirit of ideas worth spreading, TEDx is a program of local, self-organized events that bring people together to share a TED-like experience. At a TEDx event, TEDTalks video and live speakers combine to spark deep discussion and connection in a small group. These local, self-organized events are branded TEDx, where x = independently organized TED event. The TED Conference provides general guidance for the TEDx program, but individual TEDx events are self-organized.* (*Subject to certain rules and regulations)
Veja palestra no youtube
Posted by Dr. Antony P. Mueller at 06:51 Nenhum comentário: Links to this post

'In any society the dominant groups are the ones with the most to hide about the way society works." -- Barrington Moore
Posted by Dr. Antony P. Mueller at 06:21 Nenhum comentário: Links to this post

"It's one of my present arguments that we have created institutions in which the politicians are forced to be partial... It's impossible in that situation to be strictly honest, but it's not their fault. It's the fault of the institutions which we have created." Friedrich A. Hayek Interview with Bob Chitester, 1978
http://bit.ly/vItiRD

‎"What we have got now is in name democracy but is not a system in which it is the opinion of the majority which governs, but instead where the government is forced to serve a sufficient number of special interests to get a majority."
Posted by Dr. Antony P. Mueller at 13:02 Nenhum comentário: Links to this post

Nov 24th 2011, 8:55 by H.G.
CLIMATE sceptics are jubilant. In a reprise of the run-up to the Copenhagen climate-change summit in 2009, a fresh batch of possibly compromising e-mails has been released on the eve of the latest round of UN climate talks in Durban, South Africa. "All your favorite Climategate characters are here," gloats one, "once again caught red-handed in a series of emails exaggerating the extent of Anthropogenic Global Warming, while privately admitting to one another that the evidence is nowhere near as a strong as they'd like it to be."
The latest hacked snippets from the University of East Anglia's Climatic Research Unit resemble the earlier ones. They apparently discuss not putting in too much "optimistic stuff" about the extent of man-made global warming. One e-mail appears to show the government's interest in a strong line on climate change.
Mais
Leia também:

Nov 26th 2011 | from the print edition
CLIMATE science is famously complicated, but one useful number to keep in mind is “climate sensitivity”. This measures the amount of warming that can eventually be expected to follow a doubling in the atmospheric concentration of carbon dioxide. The Intergovernmental Panel on Climate Change, in its most recent summary of the science behind its predictions, published in 2007, estimated that, in present conditions, a doubling of CO2 would cause warming of about 3°C, with uncertainty of about a degree and a half in either direction. But it also says there is a small probability that the true number is much higher. Some recent studies have suggested that it could be as high as 10°C.
If that were true, disaster beckons. But a paper published in this week’s Science, by Andreas Schmittner of Oregon State University, suggests it is not. In Dr Schmittner’s analysis, the climate is less sensitive to carbon dioxide than was feared.
Mais
Posted by Dr. Antony P. Mueller at 09:36 Nenhum comentário: Links to this post

Tougher laws against online pirates are needed, but a proposal in Congress could hit law-abiding businesses

NO MATTER what the “content-should-be-free” crowd says, copyright theft robs artists and businesses of their livelihoods. Creative industries employ millions of people in the advanced world (and could be a rung on the ladder for poorer countries too, if, say, unscrupulous European content thieves did not habitually purloin the efforts of African musicians). The damage may be less than the annual $135 billion that the entertainment and publishing industries claim. These firms could change their business models to reduce the pirates’ profits, especially in countries where an album costs a day’s wages. But mispricing does not justify crime.
So far, attempts to stop online piracy have largely failed. Lawsuits did shut down file-sharing services such as Napster and Grokster, but others have taken their place—such as Pirate Bay and the new “cyberlockers” (see article) that operate in hard-to-reach jurisdictions. Many users of these sites think they are swapping, not stealing, material. But the cyberlockers make money with extra charges for heavy users.
More
Posted by Dr. Antony P. Mueller at 09:29 Nenhum comentário: Links to this post 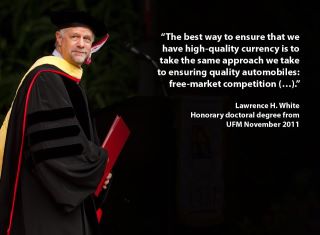 Posted by Dr. Antony P. Mueller at 20:39 Nenhum comentário: Links to this post

It's Time To Declare Peace In The War Against Drugs

Image via Wikipedia
Americans like to style their nation as the land of the free.  Yet the government is engaged in a war on its own people.  The misnamed Drug War.
As Prof. Douglas Husak of Rutgers pointed out:

The war, after all, cannot really be a war on drugs, since drugs cannot be arrested, prosecuted, or punished.  The war is against persons who use drugs.  As such, the war is a civil war, fought against the 28 million Americans who use illegal drugs annually.

Posted by Dr. Antony P. Mueller at 10:43 Nenhum comentário: Links to this post

Ending the Global War on Drugs
NAHB Auditorium
1201 15th Street, N.W., Washington D.C.
(Corner of 15th St. and M St., N.W.)
About the Conference | Conference Schedule | Registration
Although the global prohibition of drugs has manifestly failed to stem the use of narcotics, it has generated enormous costs and perverse outcomes. In the United States, the war on drugs is generating alarming violations of civil liberties, weakening the rule of law, and compromising law enforcement efforts. The U.S.-led drug war is also undermining legitimate foreign policy goals around the world, including the spread of liberal democracy and an effective war on terror. This conference will bring together prominent scholars and international leaders to analyze current policy and propose practical alternatives such as legalization.
Speakers will discuss:
MAIS
Posted by Dr. Antony P. Mueller at 09:40 Nenhum comentário: Links to this post

THE ECONOMIST:
TWENTY years ago North America, Europe and Japan produced almost all of the world’s science. They were the aristocrats of technical knowledge, presiding over a centuries-old regime. They spent the most, published the most and patented the most. And what they produced fed back into their industrial, military and medical complexes to push forward innovation, productivity, power, health and prosperity.
All good things, though, come to an end, and the reign of these scientific aristos is starting to look shaky. In 1990 they carried out more than 95% of the world’s research and development (R&D). By 2007 that figure was 76%.

Such, at least, is the conclusion of the latest report* from the United Nations Educational, Scientific and Cultural Organisation, UNESCO. The picture the report paints is of a waning West and a rising East and South, mirroring the economic shifts going on in the wider world. The sans culottes of science are on the march.
Mais
Posted by Dr. Antony P. Mueller at 04:34 Nenhum comentário: Links to this post

Dr. Antony P. Mueller
I teach economics at the Federal University of Sergipe (UFS) in Brazil. I was born and grew up in West Germany and obtained my doctorate (along with the post-doctorate degree of Dr. phil. habil. and the venia legendi) in economics from the University of Erlangen-Nuremberg. In 2007 I founded the independent think tank "The Continental Economics Institute" (www.continentaleconomics.com). Before coming to Brazil, I gained experience as an international financial market operator and held various academic positions in Europe and the United States, where I was a Fulbright scholar. My main research areas beyond macroeconomics are international finance, international political economy, monetary economics (central banking) and Austrian economics with an emphasis on the dynamics of unexpected change and dispersed knowledge, subject areas which throw me sometimes into metaphysical despair. e-mail: "antonymueller@yahoo.com"